Quantum physics mimics spooky action into the past 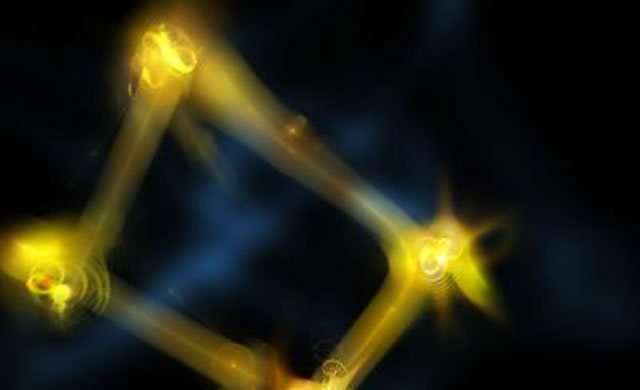 Physicists of the group of Prof. Anton Zeilinger at the Institute for Quantum Optics and Quantum Information (IQOQI), the University of Vienna, and the Vienna Center for Quantum Science and Technology (VCQ) have, for the first time, demonstrated in an experiment that the decision whether two particles were in an entangled or in a separable quantum state can be made even after these particles have been measured and may no longer exist. Their results will be published this week in the journal “Nature Physics”.

According to the Austrian physicist Erwin Schrödinger, entanglement is the characteristic trait of quantum mechanics. In addition to its crucial role for the foundations of physics, entanglement is also a key resource for upcoming quantum information technologies such as quantum cryptography and quantum computation. Entangled particles exhibit correlations which are stronger and more intricate than those allowed by the laws of classical physics. If two particles are in an entangled quantum state, they have perfectly defined joint properties at the expense of losing their individual properties. This is like having two dice which have no orientation until they are subject to measurement, upon which they certainly show the same (random) side up. In contrast, so-called separable quantum states allow for a classical description, because every particle has well-defined properties on its own. Two dice, each one of them with its own well-defined orientation, are in a separable state. Now, one would think that at least the nature of the quantum state must be an objective fact of reality. Either the dice are entangled or not. Zeilinger’s team has now demonstrated in an experiment that this is not always the case.

Exciting realization of a “Gedankenexperiment”

The authors experimentally realized a “Gedankenexperiment” called “delayed-choice entanglement swapping”, formulated by Asher Peres in the year 2000. Two pairs of entangled photons are produced, and one photon from each pair is sent to a party called Victor. Of the two remaining photons, one photon is sent to the party Alice and one is sent to the party Bob. Victor can now choose between two kinds of measurements. If he decides to measure his two photons in a way such that they are forced to be in an entangled state, then also Alice’s and Bob’s photon pair becomes entangled. If Victor chooses to measure his particles individually, Alice’s and Bob’s photon pair ends up in a separable state. Modern quantum optics technology allowed the team to delay Victor’s choice and measurement with respect to the measurements which Alice and Bob perform on their photons. “We found that whether Alice’s and Bob’s photons are entangled and show quantum correlations or are separable and show classical correlations can be decided after they have been measured”, explains Xiao-song Ma, lead author of the study.

According to the famous words of Albert Einstein, the effects of quantum entanglement appear as “spooky action at a distance”. The recent experiment has gone one remarkable step further. “Within a naïve classical word view, quantum mechanics can even mimic an influence of future actions on past events”, says Anton Zeilinger.