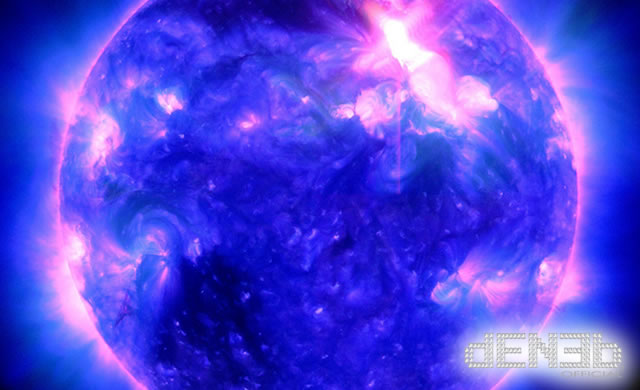 Earlier, it was stated that the current Solar Radiation Storm was the largest since May 2005, when the 10 MeV protons exceeded over 3000 PFU. This was not correct.
At the time of the earlier post, this current Storm was the biggest since January 2005, when the 10 MeV flux was 5040 pfu. After the arrival of the CME earlier today, the 10 MeV flux again increased and we were at around 6300 pfu. This is now the largest Solar Radiation Storm since October 2003. (The Halloween Storms)

SWPC forecaster predicted the arrival of the CME from 23 January around 1400Z on 24 January. Around 1433Z today, the CME was seen arriving at the ACE Spacecraft. SWPC forecasters are expecting this CME to arrive here at Earth in about 30 minutes. A G1-Geomagnetic Storm warning has been issued until 0100Z on 25 January.
Updates will be posted on www.swpc.noaa.gov

The strongest Solar Radiation Storm since September, 2005 is in progress and continues to get stronger and a very fast Coronal Mass Ejection (CME) is headed towards Earth. Geomagnetic storming is a near certainty from this event, pending preliminary analysis no estimates are available yet for timing or strength of the storm. The associated solar flare peaked at the R2 (Moderate) level on January 23 at 0400 GMT (11pm Jan 22 EST).

The Solar and Heliosphere Observatory (SOHO) and the STEREO-Behind spacecraft have both detected a CME rapidly emerging from the blast site. Analysts at the Goddard Space Weather Lab estimate a velocity of 2200 km. There is little doubt that the cloud is heading in the general direction of Earth. A preliminary inspection of SOHO/STEREO imagery suggests that the CME will deliver a strong glancing blow to Earth’s magnetic field on Jan. 24-25 as it sails mostly north of our planet. Stay tuned for updates.